Make it Real CAD Engineering Design Challenge 2211A KHU Inventors While practicing for the Tower Takeover game our team was having issues with the rubber bands when the cube holder opened. The rubber bands were breaking, and the cube holder was falling to the front. We modified a flat bar to work as a hook and hold the cube holder. From this idea I decided to use Fusion 360 to design a custom part named “The Hook”. This new part goes attach to a c-channel with 2 screws and uses a spring or a rubber band. Any of those are needed to push the hook and secure it to the other c- channel. The hook starts closed. When the cube holder opens, the c-channel that’s not attached to the part pushes the hook and opens it.  When the c-channel gets to its position, the spring pushes the hook, close it and attach it to the c-channel and keeps the two bars in place. We tried the part in our robot, and it works perfectly. The software used was Fusion 360 – 2018 (V 2.0.7046). The part was designed in the software taking measurements of the c-channels and bearings in millimeters and transferring those measurements to the software. The engineer design process was used: brainstorm, research and explore, select an approach, design in Fusion, print a protype, test, evaluate and redesign. It took six versions until the part met the expectations and worked correctly. The first thing I did was to measure the distance of the holes in a bearing to make the base. Then I measure the diameter of a screw to make a hole to the base. With the measurements of the base I started designing the part that connects the base to the hook. I measure the best angle for the hook. I tested but the c channel did not open the hook. I decided to make the hook longer with an acute angle, it didn’t work either and the c-channel broke the hook. While testing, the base also broke and I decided to make it wider, thicker and taller for it to reach the c-channel better. We also used the flat bar we modified as reference. The hook should be square with a curve at the end to ensure it will open correctly. Now it was to long and I decided to make the base and the hook shorter. I tested it without the spring and measure the distance where the spring should go and designed two ends to hold the spring in place. This time it works perfectly. Instead of a spring, a rubber band can be used but it works better with the springs because the springs stays in place and holds the hook better. The hook was printed in a Monoprice Select Mini 3D Printer V2. The Fusion design was then exported to Cura Software to slice and print. This was an excellent experience. I am acquiring experience with design software’s and it has been great. I learned that it is a process that takes time, patient, and problem-solving skills. The result surprised me positively because I was able to work through the process with ups and downs but with success at the end. Right now, our team can’t use 3d print parts but in the future we will. For now, we are also using Autodesk Inventor with great success and plan to continue using this software to design our robots before building them. Also, I use them for other school and personal projects and 3D designs. I plan to become an engineer in the future and having the opportunity of learning and using these software’s now are a great advantage.

Design, Print and Testing Process of The Hook 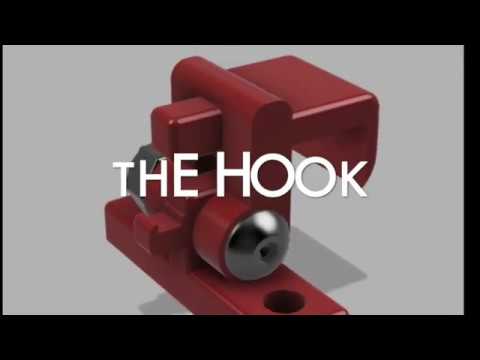