My submission for the AutoDesk “Make It Real” Engineering Challenge is the Vex Raspberry Pi Communicator. The Vex platform is amazing; the ease of use and reliability never cease to amaze me. The Raspberry Pi and its community offer networking, access to artificial intelligence software, and speech and voice recognition software, just to name a few potentials. I sought to create a part that would allow reliable communication between the two platforms. The result: a Vex Raspberry Pi communicator. Although the possible uses are only limited by one’s imagination, I chose to demonstrate how it works with an automatic dog feeder. Previously, I used the same concept with an automatic plant carer. There is a YouTube video associated with this which I have attached here.

The communicator allows for the VEX component to receive a signal from the Raspberry Pi to place water and food in a bowl. The Raspberry Pi with a real time clock monitors the time. When predetermined times occur, the Raspberry Pi triggers a pump that fills the water bowl and the Vex microcontroller allows food to pass into the feeding bowl. Additionally, a distance sensor on the Vex apparatus triggers the Raspberry Pi to take a picture of the four legged friend eating or drinking. Lastly, since the Raspberry Pi can access the internet, it is possible for one to feed, provide water, and check to see if the bowls are full when travelling.

Design of the Part:

How I used software:

Before using Tinkercad and Fusion 360, I had a general idea of what I wanted to create.  I found that using the CAD design tools helped me formulate my ideas and forced me to recognize some constraints that I did not initially recognize.  First I brought in a file representing a VEX plate and increased its depth.  This allowed for a means to attach the Communicator with screws and bolts.  Next, I added rectangular pieces to make the holding box for the sensor and LED.  I created the stand to hold the motor and support for Raspberry Pi button.  Placing each of these in the CAD environment forced me to pay attention to dimensions so that everything would fit.

I learned how to use Cad to a greater degree of complexity. This was my first time using Autocad Fusion 360. I learned that Cad designing allows for quicker trials of mechanical ideas. Working on this project has only boosted my interest in 3D-printing. I look forward to creating more robots using 3D-printed parts. Learning to use this software was not only applicable to building the automatic dog feeder- I can also apply this knowledge to my competitive VEX robotics team. Exploring solutions to problems on Cad designing has pushed my bounds creatively, which has beneficially impacted my ability to build and program our robot. I am hoping to pursue a career in something that combines robotics, engineering, and medicine. The ability to design 3D-printed pieces will serve me well in the future.

A short example of canine caretaker in action. 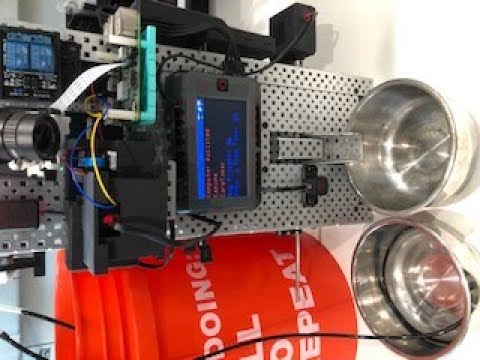 An example of an alternate way to use the communicator. Instead of feeding a dog, this contraption grows seedlings. 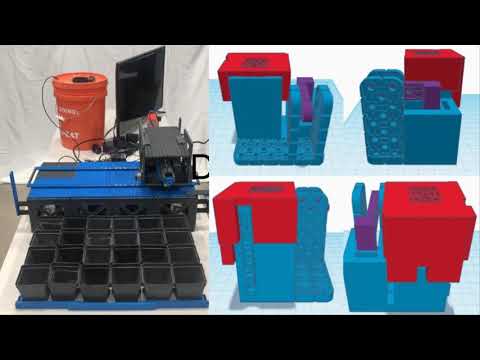