Smart Smoke Detector Our research topic is about smart smoke detectors. Smart smoke detectors use sensors to detect smoke.Traditional smoke detectors are not reliable enough, and not smart enough.  and this can cause people to ignore them. To solve this problem, we have designed a more reliable and smarter smoke detector. A smoke detector that detects fire nearby is great, but a smoke alarm that tells you there’s a fire no matter where you are is even better. It can send a message to your phone if it senses fire unlike the other smoke detectors that make a lot of noise. The smart smoke detector  also sends a message to a robot and the robot can put out the fire. Smart smoke and carbon monoxide (CO) detectors are one of the most useful categories of smart home gear on the market, mainly because they offer a clear advantage over “dumb” versions of the same product. We need to create more reliable smoke detectors. Today's smoke detectors go off whenever there is a little bit of smoke so people don’t trust them.This can result in people’s houses burning down and people dying if they don't pay any attention to their smoke detectors.   While a traditional alarm depends on you being around to hear it, a smart smoke alarm will alert you when something is wrong, no matter where you are. Although the types of sensors used (ionized or photoelectric sensors) are the same for both traditional and smart smoke detectors, that's where the similarities end.  Sensors are devices that work with machines to make the machine work in an automatic way. A sensor is a device that detects and responds to some type of input from the physical environment. An ionization smoke detector uses a radioisotope to ionize air. If any smoke particles enter the open chamber, some of the ions will attach to the particles and not be available to carry the current in that chamber. An electronic circuit detects that a current difference has developed between the open and sealed chambers, and sounds the alarm. A photoelectric, or optical smoke detector contains a source of infrared, visible, or ultraviolet light — typically an incandescent light bulb or light-emitting diode (LED) — a lens, and a photoelectric receiver — typically a photodiode. Smart smoke detectors  are worth a purchase because they won't make that annoying sound and they won't wake you up at night. But wait, don't forget smart smoke detectors have sensors. Sensors  are in robots, self driving cars, wearable devices, etc. Smart smoke detectors use the wi-fi to connect to the app on your smartphone when the alarm triggers after sensing smoke or fire. If there is one smart device for your home worth investing in, it is a smart smoke detector. 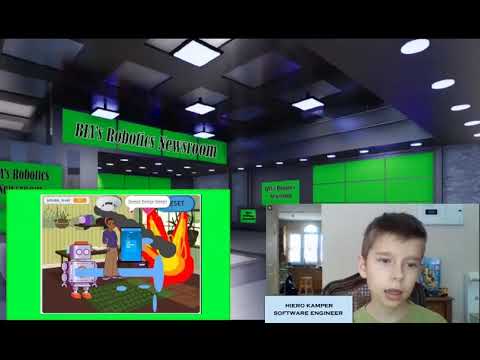 Here is a link to our scratch program simulating our smart sensor design.