This piece was created to help stabilize a four-bar lift from being flimsy to be more stable. All parallel four-bar lifts, in general, are usually flimsy. The lifts tend to sway sideways because there is no support in between the two parallel bars. This piece, the “slider beam” would help solve the problem of instability and make the bar lift system stable.   You would attach the slider beam in the first hole with the top bar on the four-bar lift. Then you would connect the slider portion to the bottom bar of the four-bar lift. I think that this design would be better than just attaching a regular beam to the top bar and the bottom bar. Mainly because, with a regular beam, it would lock the four-bar lift preventing it from lifting. My piece has a sliding portion which would make it slide and adjust into any position.    I stumbled upon this idea originally when I volunteered to help organize and sort out the  VEX VRC kits at the shop.  I found a piece that I thought was cool. The single-piece could have the ability to make other pieces have more movement. Then I looked over at a VEX IQ kit and I was very disappointed to find out that VEX IQ did not have a similar type of piece. But now, through my design idea, it will in the future.   I used Fusion 360 V.2.0.9305 to make the slider beam. Not only have I enjoyed researching, designing, and making the piece, but I also learned how to use the Fusion 360 program and feel more confident in designing. When I started this project back in late October, I first used TinkerCAD V.4.10 to make the prototypes.  Then I ran into a problem. When I finished making my piece, it was pretty bland without the unique grooves and it was not similar or consistent with the other VEX IQ pieces. That is when I realized, I needed to switch to a more advanced 3D designing software. This led me to use Fusion 360. What was interesting about Fusion 360  was that you could do more with your creations. That being said, when I first started using it, I was very confused. I did not know where to even start. I then started looking up Youtube videos, tutorials and researched how to use the system. I then recreated the basic piece I made in TinkerCAD. Next, I took a regular 1 x 6 beam to look at the grooves. I remember getting frustrated trying to implement the grooves into the piece. After a series of trials and errors, my slider beam was complete in Fusion 360.  Lastly, I tried to print my piece using my teacher's da Vinci 3D printer.  When the piece was printed, there were some sizing issues. The slider holes were too small for a connector pin, or a shaft to fit through. We then had to go back into Fusion 360 to make the holes bigger. After that, I printed it one last time, and it worked perfectly.  When I started the project in Fusion 360, it felt like an uphill battle, but I found it fun while being challenging. I will definitely use 3D designing software in the future to make prototypes. I think 3D designing is a good skill to learn on a competitive robotics team mainly because if you run into a problem, you can think outside the VEX IQ kit and make your own parts to overcome different problems for your robot.  I feel like the CAD Engineering  Challenge is a great starting point on my journey to becoming an engineer. I have been able to find problems, and learn how to overcome design obstacles by making my ideas come to a reality. 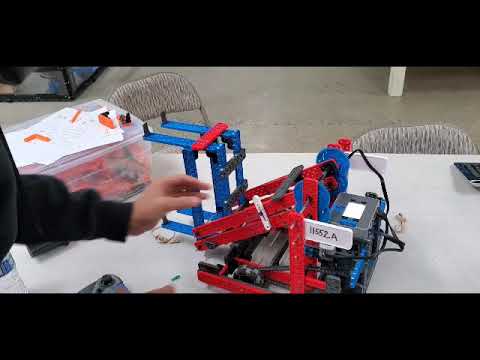