Team 38 Vexellent's entry to the VEX Design Competition Welcome, introducing VEX Wired This game is set on a 12 foot by 12 foot field with two alliances of two teams. Each team can have a coach and up to two drivers controlling their robot,. The robot is placed on the color tile corresponding to their team color at the beginning of the match. The 54 color-coded tennis ball game pieces are set in the 19 inch high wire frame bridge and can be scored into any of the six 21 inch tall square goals, or in your team's one-point low goal beside the platform . The 21" square goal on top of the platform is worth twice as much as the other square goals. During the 20 second autonomous period, the robots run without user control, only through pre-programmed instructions.When more than one pieces are scored in one goal, the one on the top is worth 2 points (capping), but the rest are worth only 1 point. After the autonomous period ends, the robots get a 2 minute user control period where the drivers pilot the robots to score as many points as they can. At the end of the match, the points are added up. An extra 5 points are awarded to the teams with their robot on the platform, those who won autonomous, and/ or those who got all of their color pieces off the wire bridge. 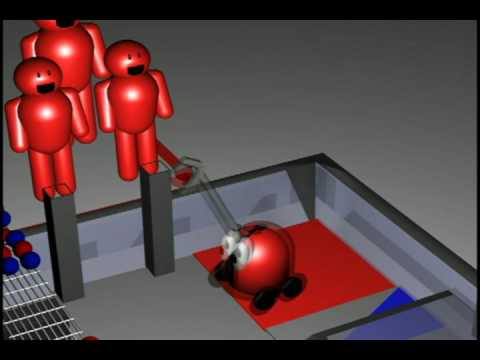 really cool game, i loved the platform goal. the way the robots were represented. looks fun to play. i'd give it a 10 out of 10

The bots required for this game would be really hard to make in vex, especially if they had to reach over to the top of the wires...

Why is your video so blurry? Did you attempt to use motion blur?