Once every other match, either our team or our alliance encountered difficulties with wires becoming unplugged or tangled. Many times those unfortunate problems hindered us from advancing further in the tournament. Through a series of brainstorming sessions, we thought of ways to combat the uncooperative wires and to find an effective solution to replace zip ties. Together, we thought of many ideas including using different localized brains, which would reduce the amount of wires going to the centralized brain. Also, we thought of a way to reduce the possibility of wires becoming unplugged, but that would only resolve half of the solution. Finally, we came up with a solution similar to a preexisting VEX part that would both replace the zip tie and ensure that the wires are not unplugged during matches. The part is based on a plus gusset, but has two opposite square pieces cut off. It’s placed where there’s a cluster of wires; from there, wires can be tied down. We called this adaptation the Wire Gusset. CAD Software: Autodesk Inventor 2013 Step-by-Step Design Process: Project Lead The Way (PLTW) Youtube Video: iMovie

Here is our VEX Robotics Engineering CAD Challenge Report. It will explain how the new part would be used and how it fits with other VEX parts and how we used CAD software (Autodesk Inventor) as part of the process we followed to create our new part. At the end, we included images or drawings of our design and the design process. 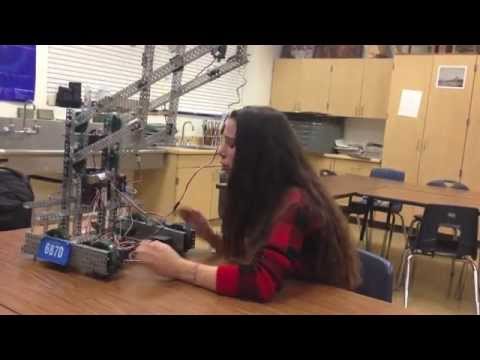 Typo on the second sentence on my previous comment. It's suppose to be "wire" not wife. So sorry.

The idea of the Wire Gusset came from the Plus Gusset. The dimensions are the same; all we did is cut off the ends on both sides and add in the clip to put your wife's in. It should fit when you attach it to the robot with screws and nuts. The Wire Gusset has a little opening so that you can put your wires. Once you put in your wires, you can close it. I prefer at least 2 or 3 of these Wire Gussets because the Wire Gusset is not to be hold with a lot of wires if you are thinking that way. It doesn't work like that. If this VEX part is invented, I would put the Wire Gussets near the brain and the motors, and put in a wire on each side of the part (There's no example CAD presented in our entry). I hope this answers your question nufininmynogin. If you have any more questions tell me.

how does this work I can't see how you thread the wire through it? the holes seem to small for even a two wire extension let alone four wire

Your team has a nice idea and has done a thorough job in the design and CAD well Done! And you have mobilized your following to cast votes However I don't think it is in the spirit of this competition to vote other good projects down with out justification, please stop that and be fair.