Unfortunately, linear actuators cannot be built to their full potential with the current VEX Robotics inventory. Rack and pinion linear actuators cannot move heavy loads. The teeth of the rack gears often break under high pressure. Pneumatic pistons have a very small range of movement. And CAMs that provide linear motion are often unnecessarily complex for their intended job. VEX Robotics does offer a leadscrew kit. The worm gears in the kit have very course threads so teams cannot build extremely powerful linear actuators. Also, the plastic worm gear cannot sustain as much force as a steel threaded axle. Because, the plastic worm gears are sold in small divisions, it is unrealistic for teams to build very big linear actuators. Clearly, their is some room to grow for VEX linear actuators.

With the addition of two simple parts, students can easily make powerful and versatile linear actuators. Our linear actuator design offers an enormous amount of torque and can be simply modified for many different sizes and situations. The new parts integrate well with the VEX Robotics Inventory.

The first part is a nutcase(ba dum tss) made out of ABS plastic. It holds a standard ½-13 hex nut. The nutcase has two tapped 8-32 holes and a hexagonal hole in the center. The hexagonal hole has a small lip on one side. The second component is a steel ½-13 threaded rod. The rod has ⅛ inch square hole through the center. When combined with other VEX components, the parts produce a stunning linear actuator.

The assembly of the linear actuator is simple.

Our team decided to make our project about Linear Actuators after a long focus group session. We started out by listing all possible ideas that we had for the VEX CAD Engineering Challenge. We narrowed down our list to the three best ideas, a linear actuator, a freewheel, and a mechanical clutch. Our team of six then split up into three groups. Each group expanded and improved upon a certain idea. Each group then presented their respective ideas to our entire robotics club. Finally, the club held a vote, and the linear actuator was shown to be the most popular idea. The main argument for the linear actuator group’s success is that linear actuators offer far more design possibilities than any of the other ideas.

We used Autodesk Inventor 2015, Autodesk 123D, and buckets of whiteboard markers for our VEX CAD Engineering Project. We started off by making rough thumbnail sketches of a linear actuator. We finalised the design, or so we thought, and proceeded to CAD an assembly with VEX parts. We made an assembly first because we wanted to ensure any new part that we designed ourselves could not already be made with VEX components.

Originally, we intended to use a set of worm gears, instead of a custom threaded axle. Our original nutcase had a center hole with the same thread as the VEX worm gear. However, we found out that there was too much friction between our 3D printed nutcase and plastic VEX Worm Gears. And, the threads of the 3D printed nutcase could not carry even a moderately heavy load. We were also concerned that most teams would not have enough worm gears to build a large linear actuator. Moreover, we felt that the worm gear thread was too course. While a course thread does increase the speed of the linear actuator, it consequently reduces the torque. We believe most VEX teams would need more torque, and accordingly a finer thread, from their linear actuators.

Because of our previous findings. we switched to our current design. We 3D printed a nutcase that can hold a ½-13 hex nut. And we broached a square hole in the center of a ½-13 threaded steel axle. To make installation easy, we tapped the mounting holes of the nut case.

After confirming our final design, we 3D modeled out new parts and completed our assembly. We then animated the assembly for clarification.

For manufacturing purposes, we made orthographic drawings of both of the models that we designed.

We saved our nutcase file as an STL and reopened it in Autodesk 123D to 3D print the file.

The VEX CAD Engineering Challenge was a great experience. We learned many useful design skills while making our linear actuator. Previous to the contest, we had never done animation work in Inventor. Now we feel comfortable with many of these complex tools, including Drive Constraints, Inventor Studio, and Exploded Views. We definitely plan on using Inventor, and CAD in general, more often in our robotics club. A lot of resources are saved by designing robot components virtually before physically. Next year, we will encourage our club teams to CAD their robots before ordering new parts. This new rule implementation will definitely prevent teams from buying excess and unnecessary parts.

Over time, we plan on improving our linear actuator design.  We want to replace the nut plate and nut with one solid steel piece. We were also thinking of using a ballscrew linear actuator in our design.

We hope you find our linear actuator idea to be a necessary addition to the VEX Robotics Inventory. We are certain that your curiosity is intrigued by the potential robot designs that this mechanism makes available. 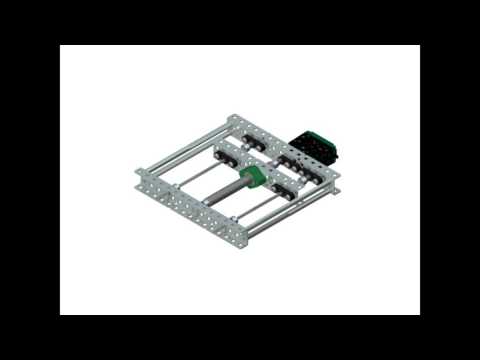 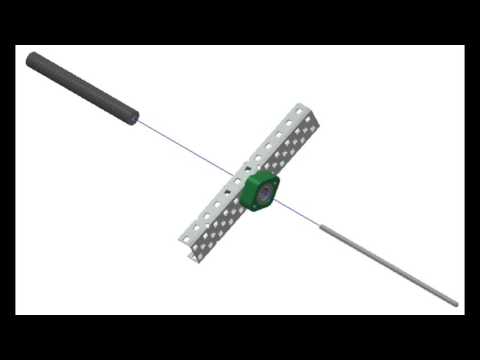