Make It Real CAD Engineering Challenge Freezing Code 9282 Final Report         When testing different gear/sprocket ratios or replacing gears/sprockets, the mechanisms location inside a complex robot has the possibility of causing an extremely time consuming swap. Even if the mechanism is not deep inside of the robot, you must take everything else off of the axle that would prevent the sought after part from sliding off. We designed this gear to solve these problems, as we have encountered them many times and wanted a better process.         The modular gear we have designed can have its concept applied to all gears and sprockets manufactured by vex, and maybe other axle mounted parts as well.  The gear we applied the concept to was the 84 tooth gear, it has 4 bolt holes extremely close to the center (2 on each side of the gear) and dimples near the outer edge that prevent the gear from losing alignment when the two halves are put together. If a gear/sprocket currently on a robot needs to be swapped out for whatever reason, simply unscrew the 4 bolts and the two halves separate. This is much faster than trying to find a way to get the axle out far enough to slide the parts off. This modular concept fits snuggly into the robot design process as it enables teams to quickly test different configurations and find what works best for the current competition and their current robot.         In order to apply this concept to the 84 tooth gear, we used Autodesk Inventor and manipulated the 84 tooth gear Autodesk Inventor part file provided by VEX. After cutting the gear in half and removing the holes in its center, we had half of a completely solid rendition of an 84 tooth gear to work with. At first we had the machine screws near the edge of the gear, and no dimples. This method did not provide enough support to the center and the axle was able to spin inside of the square hole and ream out the gear’s center. This is when we made the machine screws as close to the center as possible, and created the dimples near the edge. The gear no longer gets reamed out by the axle when too much torque is applied, and there is no need for stop collars as the bolts provide enough pressure to keep the gear in place.         While doing this project, the team learned a lot about manufacturing. In Inventor, we only designed half a gear. When manufacturing this part only one injection mold would be required, as each half is identical. Inventor has been a major asset for our team, we always build a robot or mechanism in CAD when developing new ideas. A digital rendition over a drawing or conversation makes it much easier to get the desired interpretation of your idea across. Our team will continue to use Inventor to aid in our design process. All members of our team will continue to use 3D Design software in their career, whether it be designing a bridge, a circuit, etc. Learning 3D Design software is necessary in an engineering career due to the large increase in efficiency teams can have when collaborating.

This is an animation showing how the split gear is applied to a shaft. This animation was made in Autodesk Inventor. 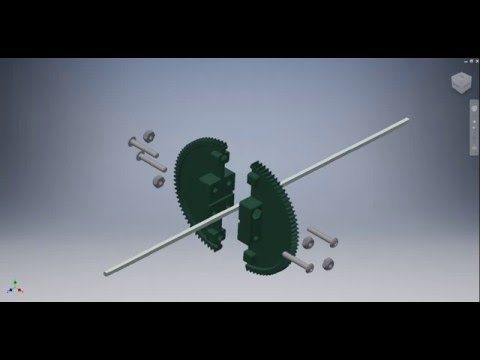 This is a link to a read-only copy of our final report in Google Docs.