We created this part because of issues in friction from standard VEX sliders, the standard sliders work good for applications where there is low sideways force where the slides do not rub against the trucks. With sideways force however the trucks act more like a brake and completely stops the sliders from moving up and down, this slider was designed to handle that sideways force well while being as compact as possible. This would be a game changer as there aren’t many good solutions to this problem and most teams simply avoid forklift style lifts all together because of issues with standard vex sliders.   This part would be used in a forklift like system where one robot has to pick up another, in a practical situation the slider cant be at the center of gravity of the robot being lifted meaning there is a lot of sideways force on the bearings. Reducing this friction by using efficient rollers and less contact will allow the robot to use less motors, have motors burn out less often and not have to worry about the sliders causing so much friction the assembly stops or even popping off entirely. The slider works by holding a C channel in place between two vex nylon rollers which are known to be low friction. It is also noted the bottom roller's bearing is slightly smaller so that the screw self threads and locks into the plastic removing the need for an extra locknut, similar to vex trucks from the linear motion kit and the inside of locknuts. We designed this to hold in place C channel because of its mounting holes, it has a large grid of them including two sides as opposed to the single strip with sliders from the motion kit.   We used Autodesk Inventor Professional Student Version to create this part. Creating the sketch with shapes and constraining them was a breeze, we used many features including dimension constraints, extrusion, appearance, and for assembling the part to see how the part would fit in real life we imported vex metal and used insert constraints, grounding, and simple joints. We also created multiple realistic renders with Inventor Studio and also an animation showing how the slider works.   In conclusion we learned about collaborating about potential solutions to many of the challenges we face in vex and also helped members of the team get involved in CAD software, an important tool in STEM fields. We will definitely be using Autodesk Inventor Professional in the future for robot prototyping. Since metal and other resources for complicated mechanisms is limited, CAD software is a must and students can create models at home away from the robotics lab. This is important for our careers because every major engineering company uses CAD and this challenge helped us learn how to collaborate with others on creating efficient solutions for real world problems. Sorry the scaling was wrong when 3d printing, it wasn't supposed to be that big. 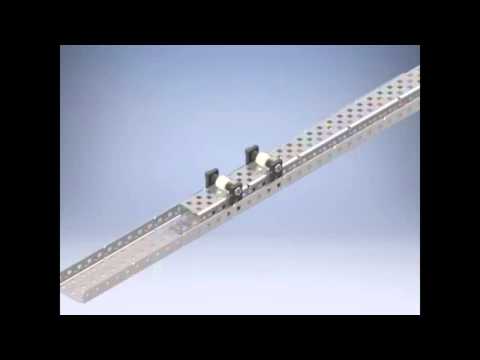