Team 8304H from Indian Hill, Ohio presents: COMRADE (COMpanion Robot Assistive DEvice)   By Calvin O’Brien, Joel Blachman, Kieran Walker, Ben Warstler, Jared Zins and Jordan Wentland   Introduction Have you ever been walking around your house, or the grocery, or your classroom, and had trouble carrying everything around? Or maybe you can’t reach something on a high shelf? Well, we have the solution. Meet the COMpanion Robot Assistive Device, or “Comrade” for short. This machine has the ability to automatically follow someone around at a set distance wherever they go. It has a variety of convenient features that are useful in many scenarios. These features include a large enclosure to hold items, an automated claw wand, a drink holder, and a coat hook that doubles as a purse and hat hook. The claw wand allows individuals to reach items that are far away and would normally be out of reach. They can then place those items into the basket for storage, and have the robot follow them around. The cup holder feature of the robot allows the user to have a drink with them all the time. For in-house use, this feature would be very beneficial to individuals who need to remember to stay hydrated. Lastly, the coat/purse hook ensures that one’s personal belongings are never too far away.   Possible Uses Comrade is useful in almost any scenario when a helping hand is needed, and the features can be repurposed for different settings. In a home environment, the basket could store books or toys for children, or work supplies for adults.  Alternatively, the basket could be used for carrying school supplies in the classroom or groceries in the grocery store.   The claw wand could be utilized for reaching glasses on a high shelf at home, which could then be put in the cup holder for easy access. In a grocery store, the claw would enable shoppers to grab hard to reach items on the top shelf. This saves a lot of time and prevents them from having to call an attendant for help. The coat hook is useful when the user is on an outing and does not want to leave their jacket behind. It can also hold large headphones when the user is not listening to music. The coat hook could function in multiple ways for female clients, as it could hold a purse too. However, unless it was hidden by a coat, a purse shouldn’t be hung on the robot unless the user is in a safe environment.   Design Process and Building Our idea for Comrade came out of our personal desire for assistance when having to carry a large number of small items. Having a helping hand would reduce the number of trips needed and  prevent accidental drops, which serves to save time and increase productivity. One issue we identified with consumer robots is that they can look intimidating, which will repel people and reduce the effectiveness of the robot. Therefore when we built Comrade, we strove to make it look cute, charming and approachable. We positioned the ultrasonic sensors in a functional arrangement that is also reminiscent of humanoid robots. This is complimented by its “smile” which also serves as another coat hook. The resulting “face” on the robot will make it seem harmless to people and attract their attention and interest. Looking to keep Comrade affordable and sustainable, we designed it around a repurposed milk crate. The design minimizes moving parts and is easy to construct and maintain. We wanted the design to be simple and robust to maximize reliability. We designed Comrade with 5” wheels so that it can follow the user outside on sidewalks and over uneven terrain. Comrade is modular and can be revised for different configurations, such as two wands, or mounting more hooks. One major decision after determining the functions of the robot was if it would be manually driven or if it would follow the user automatically.   Manual Control Autonomous Control Pros: Cons: Pros: Cons: More driver control User must carry around the control Follows user automatically To reach the robot, the user needs to walk towards it Could move in any direction User would have to learn how to drive it Always close by the user Cannot react to difficult situations such as door ways The robot can come to the driver It could be forgotten somewhere Anyone can use it     The user could not drive it and do something else at the same time The user can do other activities without worrying if the robot is there     We originally planned on making the robot entirely autonomous. However, after creating the above table, we decided to make the robot predominantly autonomous with an option for user intervention on the controller. Having the robot follow the user automatically makes it more intuitive and user-friendly, which is very important if it were to be used by the elderly who may have a hard time controlling it.   Features Chassis + Basket The chassis design allows the robot to move around freely, and the basket permits the user to store various items. Claw Wand The claw wand has many uses, and attaches to the side of the robot for accessibility. One unique aspect of the claw wand is the ease with which it can be used. Instead of a complex design, a simple button controls the opening and closing features of the claw. Again, ease of use was a major consideration in this design Ultrasonic Sensors for Following These sensors help the robot follow the user. Cup Holder The holder allows the user to always have a drink with them so they are never thirsty. Coat/Hat/Purse Hook This hook can serve many purposes, some of which include hanging a coat, hanging a hat, and hanging a purse. 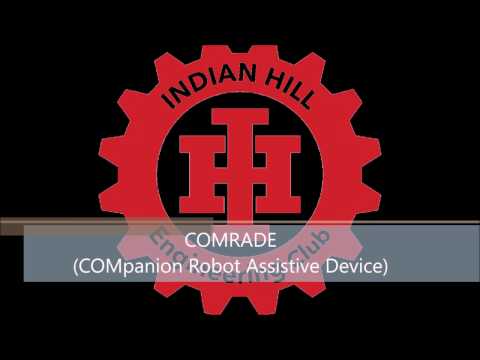 Astoloff, it doesn't follow the remote, it uses the ultrasonic sensors to track the distance to the person's torso, and uses the difference in the readings from each sensor to turn. So, if the person it is following starts to turn left, they will be closer to the left ultrasonic sensor than the right one, which makes the wheels on the right side of the robot speed up to compensate. This equalizes the distance readings from each ultrasonic "eye" and makes sure the robot actually follows the person.

Nice work. It would be better if the user didn't have to hold the remote control to get it to follow the person; maybe some other, smaller wireless piece that fits in the user's pocket could be used.