If possible, set quality to 1080p HD in the settings for best viewing. Team 97311F's 2017/2018 Online Animation Challenge Entry: Time's Up. Time’s up is played on a twelve foot by twelve foot regular vex field with eighteen by eighteen by eighteen inch robots. In the center of the field is a six foot inner-diameter, eight foot outer-diameter, circle with two foot tall ball posts at each quarter on the clock face. On opposite quarters, there are one and a half foot tall timer block ridges on which you stack the timer blocks. In a match, there are nine yellow timer blocks situated in the middle of the field and fifty-two green timer blocks: eight as preloads for each team and nine situated at each corner of the field.Yellow timer blocks are five points each on the timer ridge and ten points each stacked in one of the ball posts. Green timer blocks are two points each on the ridge and four points each stacked. In match autonomous, all of their point values are worth double for autonomous scoring only.Balls are from the 2013 2014 vex game toss up. For ten points, the ball must be taken off of its starting ball post. For fifteen additional points, the ball must be replaced on the opposite ball post of the same color. 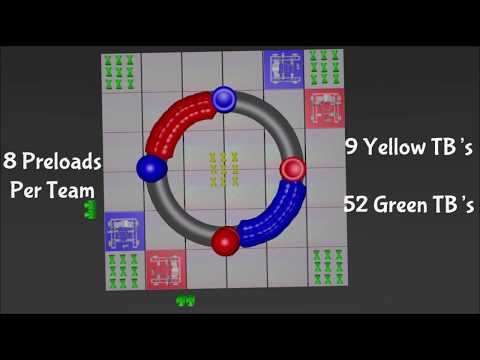