Escape from Mars Escape from Mars is a game with 3 missions. Building a shelter, rescuing astronauts, and claiming Mars. During each of these missions, teams will face new and exciting challenges such as climbing a 4' tall prison, strategically stacking blocks, and placing a flag atop prison walls.  Please see below for the official game manual. Thank you!   Scoring: •Cube in crash zone – 2 points •Helmet under prison bars – 2 points •Helmet on astronaut – 5 points •Astronaut in close-to-crash-site zone – 25 points •Flag in holder – 25 points •Robots must start inside of 18X18X18 inches but may expand once the match begins. Rules: Overall Rules: •No pinning is allowed •Robots may not damage field items (Martians take this as an act of war so the robot will be disqualified) •De-scoring helmets off of astronauts is NOT allowed •Robots MAY remove cubes from your crash site •Causing robots to fall while climbing the prison is NOT allowed – even accidently. •If a scoring object is removed from the field it will not be returned Flag Rules: •Flag may be placed on robot during the last 45 seconds if the robot is touching one of the 2 starting tiles. •Flag must be placed in one of the 4 flag mounts. It does NOT matter which side it is on. Cube Rules: •Robots MAY occupy and manipulate more than 1 cube at a time •Cubes must be placed in the back corner of the field where the crash site is located to count for the 2 points. Astronaut Rules: •Astronauts must be placed fully in the close to crash site zone to count for 25 points. In Depth Scoring Elements Analysis: Astronauts: •Made of ABS plastic •13” tall from base to “head” •Constructed just for VEX Escape from Mars •Base is 8” wide by 2” tall •“Head” has a diameter of 6” •Designed to be heavy at the bottom •Designed to be grabbed around the middle Helmets: •Foam •Constructed just for VEX Escape from Mars •Inside diameter or 6 1/8” •Outside diameter of 6 5/8” •Foam is ¼” thick •Designed with a squishy texture so teams will have to be creative when designing an intake. Cubes: •Used from VEX Skyrise •Constructed of PVC pipe •8” by 8” by 8” •Designed to be ridged – the exact opposite of the helmet. This is to force teams into think about whether or not they need two separate intake systems. Martian prison: •4’ tall •4’ wide •2’ thick •Constructed just for VEX Escape from Mars •Made of PVC •Made of ABS plastic (for top rung and sides) Flags: •made of PVC and ABS plastic •Constructed just for VEX Escape from Mars   This is my second year entering the Game Design Challenge. This year, I stepped out of my comfort zone and taught myself how to CAD using Fusion 360. I used Power Point to add in some pizazz and wrapped it all up with Camtasia 3. So without further ado, please enjoy Escape from Mars and I hope to see you at Worlds! 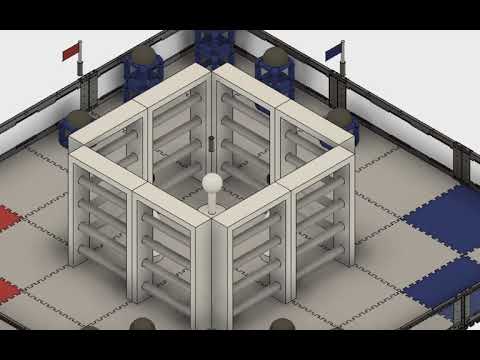