Andrew Lowy 7121E Vex Online Design Challenge 14 January 2019                                                                Snap On Spacer        The part I’ve created, the Snap On Spacer, is quite simple. Out of all the ideas my team and I considered, we decided that this was the most useful and innovative idea: a spacer that could be snapped on and off an axle. While prototyping for our first robot, Kyle and Will, two of our main builders, continuously had to disassemble components and take out axles to adjust spacing. Often times, this would result in the parts on our axles falling off. This was rather inefficient, annoying, and time consuming. Therefore, to avoid this issue, we created a spacer that can be snapped together from two halves and taken apart with ease. The snap on spacer can effectively replace any official VEX spacer being used on an axle.        The Snap On Spacer was created using Fusion 360 (version 2.0.5119), a program I am quite fond of, having used it since 2016. Originally, our spacer was made using a modified model of a VEX spacer in order to preserve the original spacer’s measurements. Our spacer model was cut into fourths, leaving only two ⅛ sections of the spacer to work with. Initial sketches were made, followed by two extrusions: one for the hole on the “top”, and one for the clips on the bottom. As the model progressed, the holes inside the top grew in thickness and refinement. As for the clips of the bottom, they were thinned and indented at the head to make separation easier when using pliers. The top and bottom of the spacer were flattened by version 7; which made pushing the two halves together much easier. Fusion 360’s parametric modeling workspace was used to create all nine iterations of the spacer. Versions 5 - 9 were 3D printed using my UP2 mini and made out of ABS plastic under the highest quality settings. Version 9 underwent two stress related simulations to test the clips: one of the official model and one emulation of how the model looks when printed (our clips have a gap between them, as opposed to being fully solid).        Versions 1 - 4 were all early concepts that never left cad. Version 5 was the first to be printed, and Version 6 was the first to snap together. Version 7 included the flattened top and bottom and worked on widening the holes further. Version 8 was the first to implement the indented head; as well as remove excess material from the clips. However, we then encountered the issue of the spacer being too striped of material to print correctly. Version 9 was the final iteration; which built on all of the previous versions. It includes widened holes and filleted corners on the top, thinner clips, a flattened shape, and an indented head.        During this project, I learned how to take advantage of rapid prototyping capabilities in order to quickly work through the design process and come to a final product. In prior projects involving 3D printing, the designs were often too large to print in a timely manner that allowed us to test our prototypes. Having access to my own, more modern printer, (as well as working with a smaller design), gave me an advantage I had not experienced in the past. Quickly printing new, high quality versions within 20 minutes and being able to test the components soon after, granted me more time to address any issues the parts may have had on cad and relate the cycle sooner.        I’ve been using Fusion 360 for over two years, and I see no need to stop using 3D cad in the future. I plan to continue to use it for modeling practice when designing race cars for professional and recreational purposes. I have found that Fusion 360 can be a great benefit to people partaking in competitive robotics. The program’s user interface is far more intuitive than any other program I’ve used. Creating assemblies (prototypes), after amassing a library of vex components is extremely quick and easy with Fusion 360. Since introducing this program to my team, two other members have adopted it for designing prototypes of their robots, and Nicole and Sabrina, the main programmer and documenter on our smaller team, were excited to be exposed to this new technology that provided extensive possibilities for our future robots. Learning 3D design software is extremely beneficial in my career path as an engineer; who’s looking to specialize in either aerospace or automotive aerodynamics. Either way, I must learn to model my ideas before validating them in cfd programs. Overall, I would say that for anyone going into engineering, learning CAD early is an extreme advantage, and for anyone building a VEX robot, our Snap On Spacer design could be of great help when it comes to saving time and building an easier to edit (and therefore improve), robot. 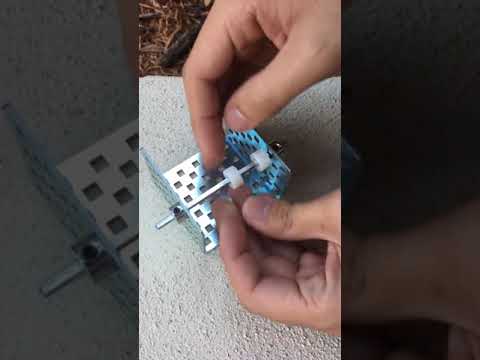