Why did we design this part: In the 2018-2019 vex game Turning Point, an extremely important task that the robot has to be capable of accomplishing is to shoot balls at the flags. We knew that a ratchet and pawl system would be extremely beneficial for a very common shooting mechanism, the flywheel. We realized that with currently available vex parts, we could only implement this system with an 84 tooth free spinning gear along with some other unconventional parts. Therefore, we decided to develop a more simple and universal ratchet and pawl system that could work on smaller gear variants. What is it and how it works: Our ratchet and pawl system consists of a base plate, and 2 pawl mechanisms located at opposite ends. The 2 pawls are connected to the base plate using normal screws and nylocks, and are able to rotate freely 360 degrees. The 2 pawls are forced to mesh with the ratchet due to rubber banding from the knob on the pawl to the extruding knob on the base plate. When the ratchet rotates in one direction, it will push the pawl with it to rotate the gear, however if the ratchet rotates in the opposite direction, then the rubber bands forcing the pawls will give away allowing the ratchet to rotate without the gear rotating along with it. This system can be used on the robot to power the flywheel so that when the motor stops running instantaneously, the flywheel will still keep rotating as it slows down which will prevent damage to the motors and stalling. The slow deceleration rate will also help the motors accelerate to full speed since you don’t have to start the motor when the gears are idle. Additionally, you can use two of these ratchet and pawl systems in a compound gear train so that you can receive two rotational outputs for only one motor input. On a robot, you can have one motor powering the flywheel when rotating clockwise, but power the lift when rotating counter-clockwise. Using Autodesk Inventor Professional 2018: To model and prototype this mechanism, we used Autodesk Inventor. Inventor is extremely user friendly, and we used a lot of constraints and tools to make the modeling and designing process easy. We began designing the base plate with the dimensions of the gears to make sure all of the gears were compatible. We designed the pawls with specific tools such as the measure tool to make sure the pawls would mesh properly with the ratchet. We also rounded edges to give the mechanism a simplistic look and to keep a low profile. Additionally, the rounded edges allowed the pawls to slide off the ratchets easier when rotating. What we learned: While working on this project, we got more familiar with the numerous features Autodesk Inventor Professional 2018 included. We also developed our skills in 3D modeling, and learned methods to become more efficient and faster. We used our skill sets from this project to model our entire robot so that we can prototype new ideas and evaluate issues in a virtual environment before physically building. 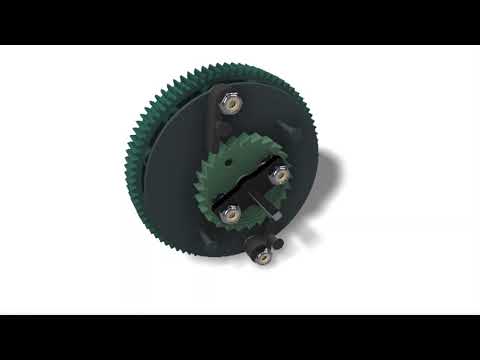