Jasper Kosa MCC Robotics   The Goal: The motivation to create this part was simple, to increase the number of buttons accessible on the V5 controller while simultaneously maintaining control of the joysticks. By default, there are only 4 buttons that can be pressed with the user's index fingers on the front face of the controller. I have always disliked the lack of rear buttons on most controllers, why would you not want more inputs accessible at any time? So to solve this I designed the V5 Scuff Controller add-on. Scuff controllers have been popular with video gamers for years, adding more buttons that can be pressed without the user removing their thumbs from the joysticks. With this new part, I have doubled the number of buttons available to pressed simultaneously. This allows Vex robot drivers to have much more freedom on the field. Instead of sacrificing valuable seconds in a match to press a button, then continue driving, the scuff paddles allow all necessary functions to be activated in easy reach while driving.   The Process: The process of creating this part in Autodesk Fusion 360 (version 2.0.5119) was both helped and hurt by the fact that I made a part accomplishing the same goal for the V4 controller as well. I wanted to use the same style for the new design as I had previously (picture “Old Version...”), however the ergonomics and design of the V5 controller made that impossible without sacrificing a large amount of the screen visibility, impeding the range of motion on the joysticks, and the lack of threaded mounting holes on the V5 controller. So I decided on a clam-shell type case that would fit around the body of the controller and provide the mounting points. I began by importing the model of the V5 controller provided on VexRobotics.com, and made a sketch on it's midplane. Then using a section analysis, I created 2 offset profiles. I repeated this on a plane offset to one side on the controller, then lofted the two profiles together. Finally I used the mirror function to finish the basic shape. The next steps were creating profiles to cut out of the main part, for the screen, buttons, and various ports. Now that the base part was ready, I started making one of the top triggers. This was the easiest, as my previous design was quite similar. After making the mounting point, I created the side profile and extruded it. Then I cut into it from above, reducing the size. Next I created the profile of the finger paddle and a path which I swept the profile along. Lastly, I created a profile that when extruded created a hard-stop for the trigger in opposite direction, which was a much needed missing feature in the previous design for the old controller. This was then mirrored for the other trigger. The rear triggers were new territory for me, so I started with a picture of my hand gripping the controller, to see where a comfortable spot for the paddles would be. Based on this picture, I knew I wanted them to be slightly angled. So I creating the profile for the mounting block at an angle and cutting it flush with the outside edge was my method of choice, which worked fine. The paddles themselves were made very similarly to the top triggers, a side profile, then cut from above for shaping. After that, I made the mounting blocks for and pieces that would actually press the buttons. These were designed to be as small as feasible, so they would not impede access to the other buttons nearby. Now that I had the both the top and bottom holes ready for connecting links, I had to figure out how to account for the angle of the paddles, as the upper parts were made parallel. The way I accomplished this was creating two parts, one for the upper pivot, and one for the lower, leaving a small gap between them. Then I lofted the two end profiles together, making them one body. This is by far not the most elegant solution I'm sure, but it seemed the best option at the time. These parts were then mirrored for the other side. Finally, I added the required screws and nylock nuts to finish the design. Unfortunately, because of the angled lower paddles I could not make all of the joints necessary for them lower triggers to function properly in CAD.   Conclusion: This project taught me a lot about using the loft tool and how it can be manipulated to create more flowing parts. The main body is the best example of this, without the loft tool this part would have been several times harder to make. On a larger scale however, this project had many parts that required rework, which in some cases caused more problems than it solved. This made me start to realize how smoothly by comparison most of my past projects have gone, even the ones I thought complicated. I will definitely be continuing to use CAD software in the future, both for designing parts for competitive robotics and personal projects like 3D printed phone stands and CNC picture frames. Knowing how to use 3D design software can never hurt, especially as my current career path is in engineering. 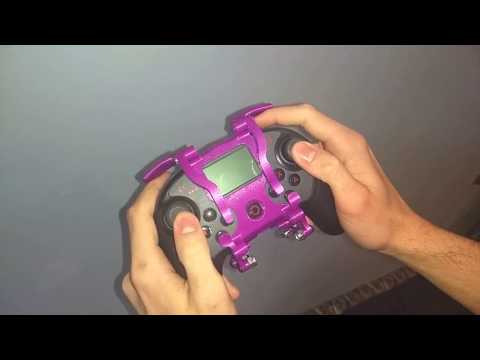 I was unable to upload my .f3d file directly to the website, so here is a link to the file on my google drive. I am aware that the instructions explictly said to not do this, however I had no other options.

do you have the v4 controller file for download? I cant seem to find it