Introduction The new V5 system has brought many new and useful features with its smart motors; however, with the motor limit decreased to eight (8) per robot, power transfer systems are much more valuable now. Through external mechanical systems, the number of powered outputs available on the robot increase, allowing a team to make better use of its motors. Ranging in difficulty, there is a multitude of ways to do this. For example, a double ratcheting system was one of easiest transmissions to implement but was proven to be a challenge to construct with the parts currently available by VEX. This was what inspired the creation of a smaller ratchet gear. The newly designed part was made to extend the functionality of VEX’s current ratchet gear by making it smaller and adaptable in order to work in systems of increased intricacy and complexity. This part addresses two limitations of the currently available ratchet gear: it was too large to use with gears smaller than eighty-four (84) tooth, and high-strength inserts were not an option. The significance of having a ratchet gear fit within a variety of gear sizes increases the combinations of possible gear ratios for the output.   Procedure Using AutoDesk Inventor 2019, a sixty (60) tooth gear was imported to get the dimensions needed in order to make the ratchet. Creating a sketch on the same plane as the gear’s surface allowed for the ratchet gear to be constructed on top of the pre-existing gear to ensure compatibility. Once the part had been designed, a 1:1 scale image of the new ratchet gear was printed out on paper. It was then traced onto cardboard and cut out by hand. The cardboard model made for an effective first prototype, allowing us to test spacing and real-world functionality, albeit with limited durability. After the success of the first prototype, two (2) holes were added to serve as a mounting point for a VEX steel lock-bar as it was discovered that the square shaft hole would easily strip once exposed to torque. The second prototype was constructed by printing an image of the gear, tracing it onto polycarbonate and then cut out. Prototype two was used to test the strength of the part with the two new holes. It worked as an effective ratchet on VEX VRC team 7842F’s flywheel, holding up to all its applied force and disengaging the wheel once the motor had halted. The Inventor part file (.ipt) was then exported to a drawing (.idw) where its outline was made red to be recognized by a laser cutter. The drawing was exported as a PDF to be used by the engraver to cut the piece out of ABS. This process allowed for the creation of many ratchets, therefore increasing our testing pool as 7842B and 7842K adopted the new part on their robots as well. As mentioned above, with the decrease in motor units allowed on a competitive VEX robot this year, ratchet gears allow for the sharing of motors to complete separate mechanical tasks. Placing a ratchet gear on the flywheel’s driveshaft allows for power to be applied to increase the speed of the wheel, but to disengage once the motor stops moving. The wheel still carries on without losing energy to the resistance of the off-powered motor. By reversing the motor, a second ratchet can be engaged to move another mechanism, such as a lift. Since a flywheel only needs to spin forward, and a lift only needs to be powered upward, the clockwise and counterclockwise rotations of the motor can be separately utilized for those two purposes individually.     Conclusion Over time, the new ratchet part was reported to have held up well through multiple competitions for all teams testing the part. For future VEX compatibility, the piece has since been slightly modified to allow the use of VEX’s metal square gear insert piece. This eliminates the need for the steel lock-bar used in prototype 2 and makes the ratchet compatible with both 0.125” and 0.25” axles. Ideally, the part would be manufactured of Acetal, but for now, the updated design will be 3D printed in PLA at school, in order to test its new functions. A readily-accessible 3D printer would assist in the rapid development and refinement of new ideas moving forward. The ability to fabricate parts quickly and inexpensively for experimentation greatly enhances the process of design and implementation of new concepts. The invaluable qualities a 3D printer contributes are greatly beneficial to an aspiring engineer such as myself.

A short video showing how the ratchet gear can be used internally on the 60 tooth gear with some half pillow bearing and zap straps. 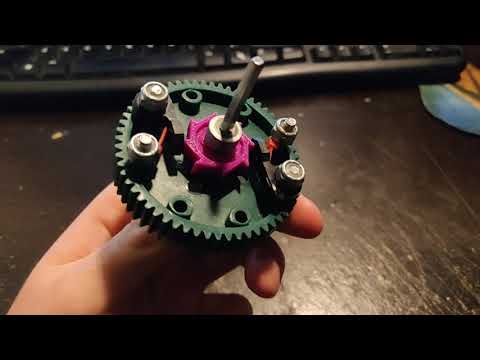 Video showing how the ratchet gear can be used on a flywheel subsystem to allow the motors to stop turning while the wheel continues to spin. 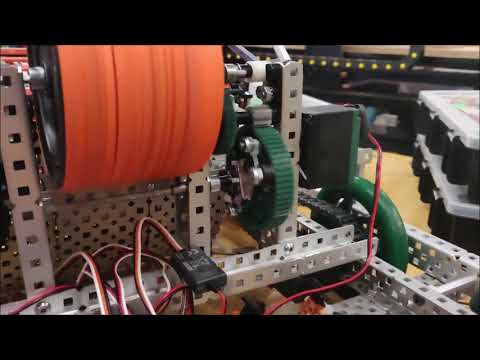