Before the V5 system, sparing a motor for little moving parts was no big deal, as teams could use up to 12 motors. However, now with the V5, teams can only use 8 motors, which limits the amount of moving parts a robot can have. But, a robot can have more moving parts if those parts do not need to be powered by motors. This passive mechanism, nicknamed “The Flipper,” allows parts to be held within an 18” cube for measure-in, but flip out once the robot moves. This unique-looking part is a small leg that is best used with a pivot point and some rubber bands. The rubber bands ensure that the flipper, as well as other moving parts, move without their own motors. The flipper slightly sticks into the foam tiles on the ground, which holds it in place while the robot is still. When a match starts, the robot drives backwards a few inches. This causes the flipper to rotate enough off the ground until the rubber band pulls it out of the way, preventing the flipper from interfering with anything during the match. The hole for the pivot point is offset from the center to ensure that the flipper rotates completely out of the way when turned, but because this hole is mirrored to the other side the flipper look like a face, which was an accident. The flipper also has a rectangular top, which can be used to hold other parts back during measure-in. Once the flipper is moved, the moving part can be pulled into place with rubber bands. The flipper can be created out of metal, but this can make small cuts in the field which is against the robot rule R3. The plastic material keeps the field safe, as it is less likely to cut up the foam. This flipper is designed to be used while touching the ground, but it could be used for mechanisms higher up on the robot; the key part is that the bottom of the flipper must be moved somehow to release another moving part from the top, all with the help of rubber bands. The flipper is also designed symmetrically so the flipper can rotate out by moving the robot either forward or backward, depending on which side the rubber band pulls. The best part about the flipper is that it allows robots to have more moving parts without excess motors. I’m Kate Keefe, a 3D printing enthusiast from VRC team 5106C. To create the flipper, I used Autodesk Inventor Professional 2018, release 2018.3. I started with a base extrusion of the shape of the flipper. Then I cut several holes into the base. The bottom hole is for rubber bands to be looped through, while the top holes are for a pivot point in the form of a long screw. The edges are filleted so the part is smooth and doesn’t catch the foam tiles. I personally enjoy using Autodesk Inventor, I like making my own unique creations. I’m not sure what I’ll make next, but I still have half this school year left to 3D print parts with my school’s printer, so that’s plenty of time for a few projects. I personally love the idea of making 3D parts for our robots. It’s very easy to create precise custom parts, rather than trying to model with metal that’s tough to cut or use lexan which can melt into a near liquid consistency. Also, if a 3D printed part breaks, it’s easy to replace since you can just reprint the part. Parts like the flipper could be super useful in the playing field, allowing for creative and easy solutions to some of the engineering problems we encounter.

Video of the flipper moving on a model robot. This model uses the flipper to hold back a piece of metal that could be used as a kickstand to prevent the robot from tipping over in a certain direction. 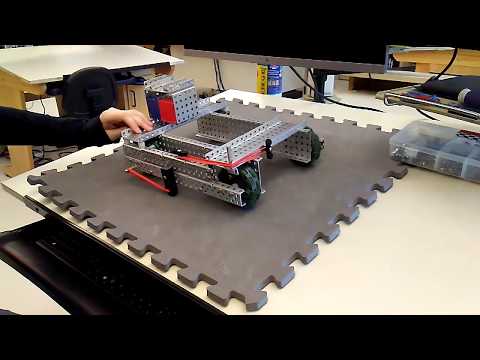